What is Cubital Tunnel Syndrome?

Cubitus is Latin for the elbow. The cubital tunnel is an anatomic passageway between the bony prominence of the inside of the elbow (medial epicondyle) and the tip of the elbow (olecranon process). Through this passageway travels the ulnar nerve as it crosses behind the elbow. To keep the nerve from displacing with movement of the elbow, the tunnel is covered with tissue called fascia.

There are many ways in which the ulnar nerve may be injured or compressed in the cubital tunnel:

Either a severe, direct impact on the inner aspect of the elbow or chronic pressure to this area (such as supporting the arm by resting the elbow) may produce swelling and inflammation within the cubital tunnel irritating the ulnar nerve. Over time, this may lead to the formation of scar tissue in and about the ulnar nerve.

The fascial covering of the cubital tunnel may lose its ability to stabilize the ulnar nerve with elbow motion. The nerve then becomes exposed to repetitive trauma as it slides in and out of its normal position.

Injury to the bones of the elbow joint may produce changes in the alignment or carrying angle of the joint. This may place tension on the ulnar nerve or narrow the size of the cubital tunnel.

Tumors such as ganglion cysts or anomalous structures such as an extra muscle may compromise the space available for the ulnar nerve within the cubital tunnel.

The ulnar nerve provides sensation to the little finger and half of the ring finger. It supplies several muscles in the forearm but most importantly controls many of the small muscles in the hand responsible for coordinating finger motion and pinch. Patients with this condition commonly exhibit symptoms of intermittent numbness or tingling in the ring and little fingers of the affected side.

These symptoms may occur with prolonged flexion of the elbow or resting against the elbow. There may be an associated aching discomfort along the inner forearm or elbow. If nerve damage persists, there is a loss of sensation in the ring and little fingers. Eventually, there is loss of pinch and grip strength. Severe cases will reveal loss of muscle bulk or wasting over the little finger aspect of the palm and along the back of the first webspace.

How is Cubital Tunnel Syndrome Treated?

In the early stages of cubital tunnel syndrome, symptoms may be alleviated by avoiding activities requiring prolonged or repetitive elbow flexion or resting against the elbow. To prevent elbow flexion, particularly at night, it may be necessary to use a long-arm splint. At times, an oral anti-inflammatory is helpful in alleviating symptoms.

When cubital tunnel syndrome is severe or fails to improve with conservative management, surgery may be indicated. The goal of surgery is to relieve the compression of the ulnar nerve within the cubital tunnel. You may resume full activity 2 weeks after the procedure, but full nerve recovery may take longer. In severe cases with loss of sensation and muscle wasting, complete recovery may not be possible. With proper diagnosis and appropriate treatment, the progression of this condition may be prevented. 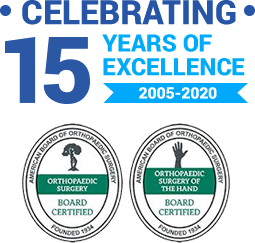